Finished another cardigan for my little babe. It's called Puerperium Cardigan, it's newborn size with buttoning on the side, kimono-style. 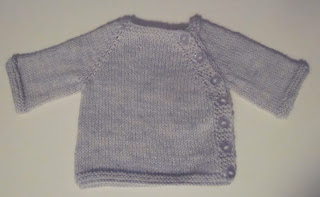 The pattern asks for DK weight yarn, and luckily, I had the perfect stuff in my stash - Shibui Baby Alpaca DK that I got on our trip to Oregon. It is incredibly soft & lightweight. The color is mist, and it's a soft white with bluish hints. I absolutely love it. 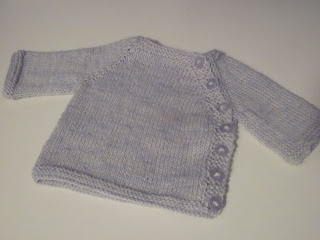 Now I'm going to work on matching hat and possibly booties, since I have plenty of the yarn left.
3 comments: Links to this post
Email ThisBlogThis!Share to TwitterShare to FacebookShare to Pinterest
Labels: knitting

I've started feeling a little homely lately, so I decided a new haircut was in order. What a difference a small change can make in how you feel! Jeffers took some pics. 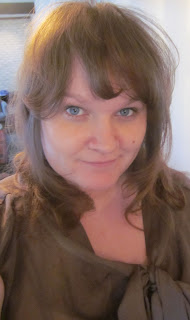 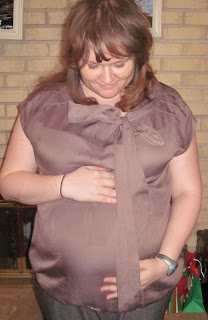 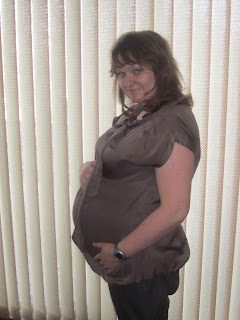 Of course, some obligatory belly shots. Despite the largeness in my middle, I still have a droopy butt. :)
We also attended the postpartum adjustments class at the hospital where I plan to deliver. It was interesting to hear from a panel of new parents who told us how they managed after baby came home. Some interesting and scary stuff. But it's good to have realistic expectations of what it is going to be like.
1 comment: Links to this post
Email ThisBlogThis!Share to TwitterShare to FacebookShare to Pinterest
Labels: baby, style

The yarn shop I work for is introducing a metallic version of its Flounce yarn, so I was asked to knit a sample. This was a very quick knit. It's a little awkward at first, but once you get a hang of it, it only takes a few hours to whip up a quick fun scarf. 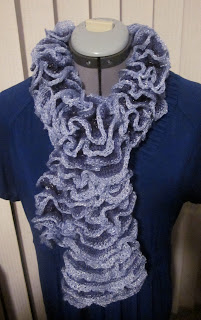 I like it more than the first Flounce scarf I knitted a while ago. The sparkles make it extra festive. I also like how the color is lighter on one edge, giving it a frosted look. Overall, not bad, even if it is not something I would wear myself.  What do you guys think?
2 comments: Links to this post
Email ThisBlogThis!Share to TwitterShare to FacebookShare to Pinterest
Labels: knitting

This morning was my 28-week doctor's appointment. Here is where we are at:

Gals from my book club at work planned a potluck on Monday. My goal was to make something simple and holiday-ish, so I gathered a couple of recipes: smoked salmon bites from a Rachel Ray book and cranberry raisin orange loaf from the internet. 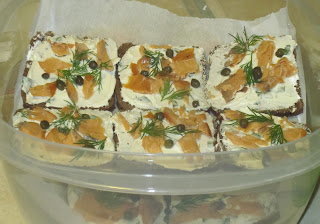 The salmon bites consisted of pumpernickel bread onto which I spread cream cheese which I mixed with fresh chopped chives. These are then topped with smoked salmon, fresh dill and capers. While it looked and sounded good, it was a bit dry for my taste. 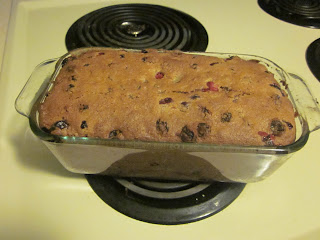 The loaf consisted of fresh cranberries, golden raisins, walnuts, orange zest and freshly squeezed orange juice. To get it to cool, I removed the loaf from the pan and put it on some paper towels on the counter.

Unfortunately, our naughty dog was able to pull on one of the corners of the paper towel and get to it. When I returned to kitchen there was nothing left except some paper towels and crumbs on the floor. Of course, there was some scolding and tears involved. And dog did not get dinner that night (not that he would have cared). I was mostly concerned about what it would do to Wally - not sure dogs are supposed to eat raisins, walnuts and cranberries. Luckily, he survived. What a rascal! 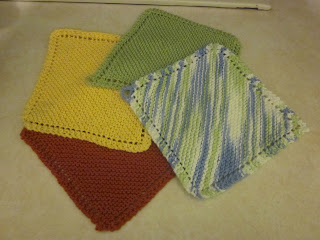 I also finished some easy knits - traditional, 100% cotton dish cloths. These will be a gift for someone. 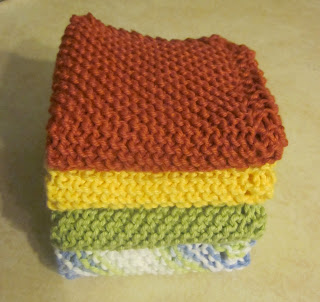 Sometimes you just have to do some mindless knitting. And it was fun to use up some of my stash yarn. My goal for 2012 is to significantly reduce my yarn inventory. I have tons of it. There are also lots of knitting projects that need to be completed. Hopefully I can make a dent in my work in the upcoming year. However, I know it's going to be hard to resist new yarns and projects. What an all-consuming hobby!
1 comment: Links to this post
Email ThisBlogThis!Share to TwitterShare to FacebookShare to Pinterest
Labels: food, knitting, puppy

It's been too long since my last update. Time to get caught up...

1.) Sisters' 21st birthday - Hubby and I drove over to my parents house to celebrate my sisters' birthday. Got talked into taking a picture by the tree. It's probably my first photo showing my huge bump.
2.) Christmas party at the yarn shop - After work on Saturday, we had a little holiday gathering. Love these people.

beartifix
This is a journal of my journey through time. It allows me to record moments, people, things and events that make up my days and make me happy.

Book(s) I am reading now